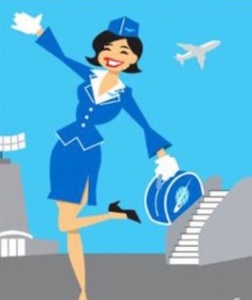 The Scale!  How I’ve always hated the scale.  Probably because when I first became a Flight Attendant back in the late 1970’s the Airlines were really hung up on the scale.  Your job hinged on it.  Thank God discrimination laws have changed all that.  As Flight Attendants we had “Weight Check”.  Can you believe that.  Having to be weighed for your job.  Barbaric!  Your supervisor could weigh you at any time without any notice and decide if you should be on Weight Check.  This meant you were given a certain amount of time to lose that weight or you would lose your job.  The Pressure!  For my height 5’2″ I could weigh between 105 and 112 pounds.  Sure that’s fairly easy when you’re young and haven’t had children.  If I weighed that weight now my friends and family would think I had a serious illness.  Which would be true.  It would be called Starvation and Malnutrition.  Those days are long gone thank goodness now Flight Attendants can be weighed by their job performance not their weight.  So that’s why I have avoided the scale for years, hence the weight gain but now I am not afraid of the scale.  We need that beast to use as a gauge to see if our weight lose plan is working.  Don’t become obsessed with it and weigh yourself several times a day or every day.  And you know you are out there.  But instead use it once a week.  First thing in the morning, no water, no clothes, right it down and then let it go.  LET IT GO.